Whatever their current symptoms, people with APDS have the potential to develop life-threatening complications, including malignancy, at any time, So early diagnosis and management is essential

APDS is associated with a wide range of clinical manifestations.1,2

Recurrent respiratory tract infections are the first clinical manifestations of APDS in the majority (~65%) of patients; other common first presentations are organomegaly (~16%) and other infections (~11%).3 Respiratory infections typically occur in infancy or childhood, followed by bronchiectasis and autoimmunity in later childhood.3,4

Lymphoproliferation is a common clinical manifestation in APDS, being reported in 70.4% of patients at a median age of 3 years (range: 1-6 years).3 Lymphadenopathy has been found to be the most frequent manifestation (reported in ~58% of patients, and more common in APDS2 than in APDS1), followed by splenomegaly (~44%) and hepatomegaly (~24%, and almost three-times more frequent in APDS1 patients).3 Other benign lymphoid proliferations that have been reported in APDS patients include reactive hyperplasia and lymphadenitis in the gastrointestinal and respiratory tract (~25%, and more often in APDS 1), and tonsillar hypertrophy (~9%; more often in APDS2 patients).3

Lymphoma, often presenting by the late teens or early adulthood is one of the major complications of APDS, with diffuse large B cell lymphoma (DLBCL) being the predominant type.1 The cumulative risk of lymphoid malignancy is very high: it has been estimated to be 78% at the age of 40 years.2

As APDS was only recognised recently (2013), the majority of adults diagnosed with APDS suffered from recurrent infections in childhood that were not perceived to be severe enough to require further testing or investigation. The most common initial referrals for adults are to haematologists (due to lymphoproliferative symptoms leading to lymphoma). 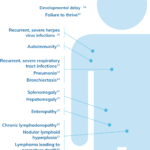 APDS evolves over time and is likely to be underdiagnosed

APDS is a progressive disease that can lead to end-organ damage and early mortality. Most commonly, manifestations begin in infancy with severe, recurrent sinopulmonary infections, while the lymphoproliferative and autoimmune disorders mentioned above often occur later in childhood.

People with APDS usually suffer from any two or more of the complications below:

Recurrent sinopulmonary infections are often severe and include upper respiratory tract infections, otitis media (which can progress to a permanent hearing loss), sinusitis, pneumonia, and bronchitis. These infections are typically the first disease manifestation and have been reported to appear as soon as early infancy. However, these are all characteristic of PIDs, so these symptoms alone cannot suggest a more specific diagnosis.

Lung damage from infections, combined with lymphadenopathy and nodular mucosal hyperplasia, may progress to permanent end organ damage in the form of bronchiectasis. Onset has been reported to have occurred at around 11–13 years of age.2-6

Chronic diarrhoea, malabsorption, and colitis have been frequently observed in patients with APDS at around 5 years of age. Enteropathy may be associated with nodular mucosal hyperplasia in the gastrointestinal tract and failure to thrive.2,4,5

Both acute and chronic viral infections or reactivations have been observed, particularly Epstein-Barr virus (EBV) and Cytomegalovirus (CMV). EBV and CMV infections, including chronic viremia and disseminated infections, are the most severe and have been reported to occur in 24-30% and 15-17% of patients, respectively. Chronic EBV infection can also lead to lymphoma in patients with APDS. Herpes simplex virus (HSV) and varicella zoster virus (VZV) have also been seen in patients with APDS.2-5,7

Other complications of APDS

While cytopenias are the most common autoimmune diseases in APDS, other autoimmune and autoinflammatory conditions such as autoimmune thyroidosis, arthritis, glomerulonephritis, cirrhosis, sclerosing cholangitis, autoimmune hepatitis, diabetes, and eczema have been reported. Onset of autoimmunity has been reported to begin around 10.5 years of age.2-5

In patients with APDS2 in particular, height and weight may be severely impaired. This inadequate growth may be associated with enteropathy.2,3,5

Lymphoma has been reported to have been the most common malignancy seen in patients with APDS and includes classical Hodgkin lymphomas as well as non-Hodgkin lymphomas such as diffuse large B cell lymphoma and marginal zone B cell lymphoma. The risk of lymphoma appears to be greater in patients with a history of viral infections, particularly EBV. Onset has been reported to occur at a median age of 18–23 years of age, and was the initial diagnosis for 21% of patients. Lymphoma may result in early mortality, and it has been calculated that 62% of APDS fatalities are due to lymphoma. Other malignancies such as leukaemias and solid organ malignancy may also affect patients with APDS, though less frequently than lymphoma. The cumulative risk for malignancy at 40 years of age is 78% for patients with APDS2.2-5,7

Impact on patients’ quality of life

APDS can have a significant burden on quality of life.1-3 In particular, the frequent sinus and lung infections that lead to the development of bronchiectasis have ensuing implications for the patients’ prognosis and quality of life.4-6

In addition to the physical impacts of disease, hospitalisations and surgical interventions are common, polypharmacy is often necessary to manage symptoms, and patients see multiple doctors throughout both the diagnosis and management stages.1 These factors can cause patients to miss school, work, or social activities, and cause anxiety, depression and stress.7-9 Fatigue is also common among patients with primary immunodeficiencies such as APDS and can negatively impact quality of life.7-10

APDS is also likely to have a negative psychological impact on patients. In a recent study of 293 adult patients with PIDs and age-matched control subjects, the 4-Dimensional Symptom Questionnaire (4-DSQ) was used to assess the psychological impact of their condition. The 4-DSQ is a self-reported questionnaire which measures four symptom dimensions: distress, depression, anxiety, and somatisation, across 50 subitems. The proportions of PID patients reporting moderate or high levels for each dimension (33.9% distress, 18.9% depression, 22.4% anxiety, and 36.2% somatisation) were significantly higher than those of the control subjects (16.3% distress, 5.7% depression, 8.0% anxiety, and 11.2% somatisation).11 This illustrates that PID patients are at increased risk of several mental health difficulties, including fear of infections, social isolation, maladaptation to illness, and concerns over the future impact of their illness.11

Sign-up to get access to podcasts by experts in the field, watch webinar broadcasts and receive APDS related clinical trial information and APDS News.

Register now
We use cookies on our website to give you the most relevant experience by remembering your preferences and repeat visits. By clicking “Accept All”, you consent to the use of ALL the cookies. However, you may visit "Cookie Settings" to provide a controlled consent.
Cookie SettingsAccept All
Manage consent

This website uses cookies to improve your experience while you navigate through the website. Out of these, the cookies that are categorized as necessary are stored on your browser as they are essential for the working of basic functionalities of the website. We also use third-party cookies that help us analyze and understand how you use this website. These cookies will be stored in your browser only with your consent. You also have the option to opt-out of these cookies. But opting out of some of these cookies may affect your browsing experience.
Necessary Always Enabled
Necessary cookies are absolutely essential for the website to function properly. These cookies ensure basic functionalities and security features of the website, anonymously.
Functional
Functional cookies help to perform certain functionalities like sharing the content of the website on social media platforms, collect feedbacks, and other third-party features.
Performance
Performance cookies are used to understand and analyze the key performance indexes of the website which helps in delivering a better user experience for the visitors.
Analytics
Analytical cookies are used to understand how visitors interact with the website. These cookies help provide information on metrics the number of visitors, bounce rate, traffic source, etc.
Advertisement
Advertisement cookies are used to provide visitors with relevant ads and marketing campaigns. These cookies track visitors across websites and collect information to provide customized ads.
Others
Other uncategorized cookies are those that are being analyzed and have not been classified into a category as yet.
SAVE & ACCEPT